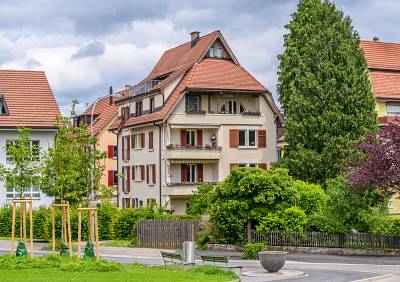 Apartment buildings have increased in value in Q2, 2021, while office properties stagnated. Over the past four quarters, both segments have gained in market value. The total return in 2021 was higher than in the previous year.

According to an FPRE analysis, the market value of mixed-use income properties (made up of 60 % housing  and 40 % office use) in Switzerland has increased by 0.5 percent from Q1 to Q2, 2021. Looking back over the past four quarters, the increase in value was at a consistent 0.5 percent. However, developments during the last quarter differed depending on subsegment: While office properties stagnated at 0.0 percent, apartment buildings increased in value by 0.8 percent. It is a different story when viewed over the past four quarters - both office properties (+0.6 %) and apartment buildings (0.4 %) increased slightly in value. A regional analysis highlights the most prominent increase in the market value of mixed-us income properties in the regions of Zurich (+2.9%) and Eastern Switzerland (+1.0 %) when compared to the same quarter of the previous year. At the same time, values decreased in Mittelland (-2.9 %), the Lake Geneva region (-1.8 %) as well as Basel (-0.4 %).

According to provisional data, the cash flow return for mixed-use income properties in 2021 remains unchanged from the previous year (3.2 %), while the overall return increased from 3.0 percent to 4.1 percent. This increase can be ascribed to the development of the change-in-value return, which, after being negative in the last year (-0.2 %) is expected to be positive in 2021 (+0.9 %).

A continuously increasing market value and a relatively decent return - especially when compared to other investment options - add to the appeal of investing in income properties, more specifically apartment buildings. However, this situation may change: “The development of returns correlates to the trend in interest rates, and the question is not if but rather when interest rates will increase. Once interest rates - and the yield expectations of investors - increase, this will lead to apartment buildings dropping in market value. In addition, in case the return on government bonds surpasses a certain threshold - and it is hard to exactly predict this threshold - the demand for apartment buildings is very likely to decline, and building activities will cease,” says Stefan Fahrländer, partner at FPRE.

This being said, things are not likely to change to that extent in the immediate future. Rental rates remain stable and there have not been any major changes in interest rates in Switzerland, which is why FPRE expects stable market values for apartment buildings for the remainder of 2021. There is some leeway in regions that are high in demand, while older buildings are losing in value, especially in the outskirts.

For office property on the other hand – a market that was confronted with declining rental yields and an increasing number of vacancies in recent years – FPRE is expecting a drop in prices, especially if they are not in a prime location.