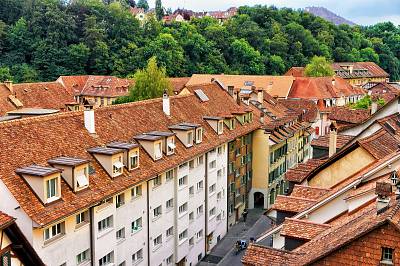 A pandemic, a war and inflation: Irrespective of the turbulent and insecure times we are currently seeing, the prices for Swiss residential properties keep increasing. Why is that the case and what are the developments to be expected in the near future?

The rather strong economic rebound that Switzerland experienced as an aftermath of the Corona pandemic has meanwhile unfortunately reached its peak, due to the war in the Ukraine and the return of the inflation. However, when looking at other countries, Switzerland compares quite favourably, with an expected economic growth of 2.7 percent until the end of 2022. This growth creates new jobs, which in turn leads to increased levels of immigration. And with more people living in Switzerland, there is more demand for residential property, which drives real estate prices if - as is currently the case - supply is surpassed by demand.

Growing inflation as a driver for interest rates

The development of interest rates is another important factor impacting future developments on the real estate market. The low interest rates of recent years have been an important driver for real estate prices in Switzerland. However, the inflation rates in the US reached 8.5 percent in March 2022, a level it was last at 40 years ago. As a result of increasing prices, the Federal Bank increased the interest rates, and further increases are expected. Increased interest rates have a direct impact on the real estate market, as mortgages and thus the financing of properties become more expensive. This means that less people can afford to buy, which in turn leads to less demand and thus lower prices. With market players anticipating an increase of interest rates, mortgages in Switzerland have already become slightly more expensive.

However, Switzerland is an exception to the rule when it comes to the development of interest rates: In Switzerland, experts expect an overall inflation increase of 2 percent for the year 2022, which is very moderate when compared to other countries. The Swiss National Bank will keep its reserved stance and increase interest rates only minimally, if at all, as the risk of an overheating economic climate is low, thanks to the inflation. This is why the risk of drastically decreasing prices caused by massively increasing financing costs is relatively low.

According to a survey by Fahrländer Partner Raumentwicklung (FPRE) conducted in the spring of 2022 with more than 700 participating real estate experts, the majority expects prices for freehold flats and single-family homes to further increase over the coming 12 months. The expectations for apartment buildings are similarly positive, although slightly less so than in the autumn of 2021. Prices are expected to remain stable for office and retail buildings.

For buyers and sellers alike this means that the prices for homeownership are likely to develop the way they have over the past 20 years: They will keep increasing. However, due to the already high level of prices, the growth rates are expected to slow down somewhat.

In addition, the increased demand for larger properties in more rural areas that has been caused by the pandemic is not likely to persist. The demand for freehold flats in larger agglomeration areas is likely to remain. Those areas often lack the necessary supply,, which is why further price increases are expected to be quite significant.

This is how prices for real estate have developed

According to FPRE, throughout Switzerland the prices for freehold flats have increased by 4.9 percent, and prices for single-family homes by 4.7 percent in the last 12 months. The Zurich region (+6.9%), the region around Lake Geneva as well as Basel (both +6.4%) saw the highest increases for medium-segment freehold flats. The regions of Southern Switzerland (+0.7%) and Mittelland (+3.7%) were at the other end of the spectrum. The market values for apartment buildings as well as office properties have increased by 8.2 respectively 9.7 percent over the last four quarters.